Second in a series. Part 1 is here.

4thWaveNow contributor Worriedmom has practiced civil litigation for many years in federal and state courts.

San Francisco phalloplasty surgeon, Curtis Crane, M.D., continues his odyssey through the San Francisco court system. Since our initial post about Dr. Crane and his legal troubles, one of the lawsuits that was then pending against him has apparently been settled, and two more have been filed. This brings to a total of eight the number of times that Dr. Crane has now been sued for medical malpractice in San Francisco Superior Court.

This post updates the reader on the various lawsuits now pending against Dr. Crane, and also documents the peculiar silence with which these allegations have been greeted in the transgender community. It is indeed strange that, for all their fears about violence and mistreatment, transgender activists do not appear concerned in the slightest about a member of the medical profession who is alleged to have botched multiple surgeries, behaved insensitively (some would say cruelly), and caused medical havoc for many. (Of course, the allegations contained in the complaints detailed herein, until either admitted, or tested and proven in a court of law, remain just that – allegations).

In fairness to Dr. Crane, let’s start with some general observations about medical malpractice. Although it’s difficult to find comprehensive statistics, a recent (2017) survey conducted by Medscape found that 55% of all practicing U.S. physicians have been sued at least once. According to the survey, surgeons, such as Dr. Crane, are particularly likely to be sued (85% of them have faced a malpractice suit at some point in their careers). However, a large-scale study using data from the National Practitioner Data Bank also found that a tiny fraction of doctors (1%) accounts for almost one-third (32%) of paid medical claims.

Claim-proneness results from a number of factors, including type of specialty, age and sex; however:

Dr. Crane thus appears to be among the fraction of physicians who are extremely frequent targets for medical malpractice lawsuits.

Before getting into the details, we wondered whether perhaps lawsuits are a common occurrence in practice areas such as this one that involve relatively experimental or new procedures, and a patient base that might tend to have unreasonably high expectations. But a San Francisco Superior Court record search for Doctors Thomas Satterwhite, Michael Safir, Richard Santucci, Ashley DeLeon, and Charles Lee, all surgical partners in Dr. Crane’s practice, does not reveal any pending medical malpractice lawsuits for any of these doctors. Curious indeed.

As is common to all United States courts, records of lawsuits and the underlying documents can be found by going to the court website for the appropriate jurisdiction, in this case the San Francisco Superior Court. It is helpful to have the case number (also called an “index” or “docket” number), although a search can also be performed using the person’s name, so those are provided below.

A review of the lawsuits pending against Dr. Crane reveals the following detail:

Lewis Raynor and Haven Herrin v. Crane, CGC-17-556713. The plaintiff in this case alleges negligence in connection with Dr. Crane’s implantation of an inflated pump device in a second-stage phalloplasty, and the subsequent infection and loss of 40% of the plaintiff’s penis. Trial is set for December 17, 2018.

Doe v. Crane, CGC-17-557327. The plaintiff alleges negligence in connection with three “transformative urological surgical procedures,” including a “procedure similar to a metoidioplasty,” replacement of testicular implants, and the placement of a new 3-piece inflatable implant. A metoidioplasty is a surgical procedure that uses clitoral tissue that has been enlarged through testosterone use to form a “neophallus.” Trial is set for February 19, 2019.

Carter v. Crane, CGC-16-554254. This case involves the truly unfortunate case of Cayden Carter, a young trans man who has endured over 20 surgeries in a thus far fruitless quest to obtain, and then ameliorate the effects of, a male-appearing genital structure. Carter maintains a Tumblr blog and has written extensively about the many surgeries and lasting problems resulting from the original phalloplasty, including an ileostomy and the continued need for a colostomy bag. 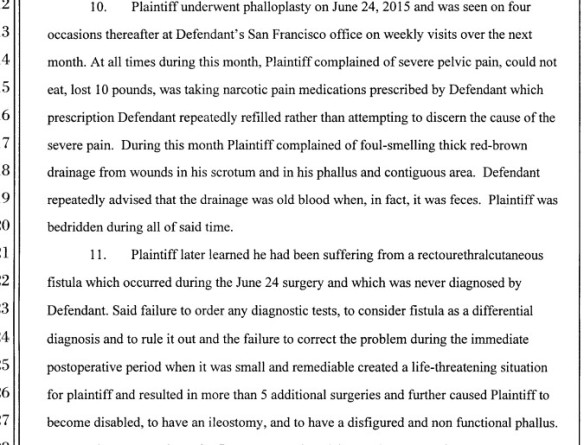 According to Carter’s complaint, the first surgery performed by Dr. Crane resulted in a perforated colon, which Dr. Crane first ignored and then failed to repair. There is no trial date set for this matter.

Taylor Carson v. Crane, CGC-17-556743. This case involves a plaintiff who was operated on twice by Dr. Crane, first to create a penis (which became infected) and second to attempt to repair holes in the urethra in the new penis (which failed). The entire penis was later removed, and the plaintiff was informed by another doctor that he never should have been considered for this surgery. The case has been set down for trial on March 4, 2019.

Doe v. Crane, CGC-17-560690. This case involves a plaintiff who had already undergone several transgender surgeries who wished to replace an earlier phalloplasty with a new graft that would also include lengthened urethra. The plaintiff had already undergone a “vaginectomy” (surgery to remove all or part of the vagina) and a “scrotoplasty” (a plastic surgery designed to transform part of the female genital area into a scrotum). According to the plaintiff, he specifically advised Dr. Crane’s practice in advance of surgery that he did not require a vaginectomy or a scrotoplasty; however, during the phalloplasty both of these surgeries were indeed performed. Interestingly, possibly due to potential statute of limitations restrictions, the plaintiff brought his complaint seeking damages for “medical battery” and “promissory fraud,” rather than medical malpractice. On January 4, 2018, the court denied Dr. Crane’s motion to dismiss the complaint. Trial is set for June 24, 2019. 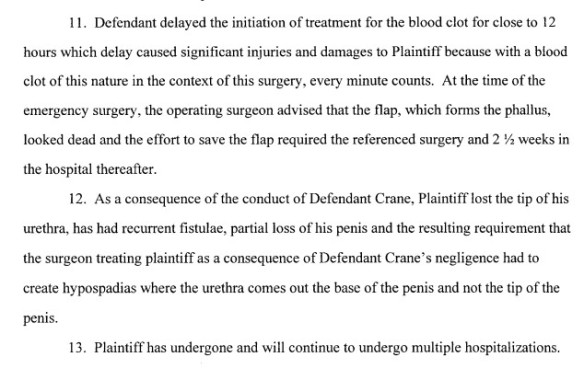 Most recently, Dr. Crane moved to have the complaint dismissed on various grounds and on February 14 of this year he lost that motion. The case does not appear to be set for trial.

Andrew Shepherd v. Crane, CGC-17-559294. In this case, the plaintiff sought to have a phalloplasty and the construction of a “large, realistic-looking scrotum.” However, the scrotum that the plaintiff was allegedly given by Dr. Crane was too small to contain even the smallest testicular implants. Since this surgery, the plaintiff has had two more surgeries, with other doctors, to obtain a larger scrotum, but they have both been unsuccessful. The case is set for trial on April 15, 2019.

In addition to the above seven cases, an eighth case, Doe v. Crane, CGC-16-550630, has now been settled (as of June 2017). This case also involved urology/surgical services provided as part of a female-to-male transition. According to the plaintiff, 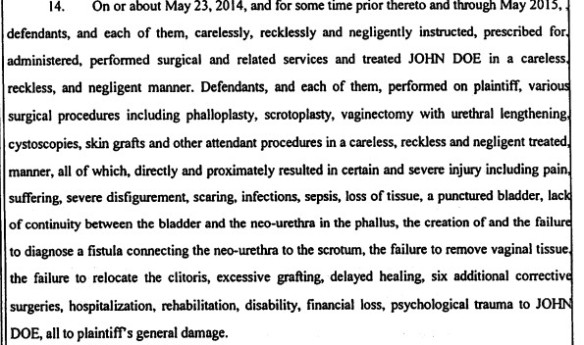 The court documents do not disclose what, if anything, the plaintiff received in settlement of the case.

One allegation common to virtually all of the above cases is that Dr. Crane “over-promised” and “under-delivered” in terms of the likely success, appearance, and functionality of the constructed genitals. Moreover, several of the plaintiffs also allege that Dr. Crane’s response, when confronted with complications or distressing symptoms following surgery, was inadequate, unconcerned, and even unfeeling.

As a final note, other than coverage by 4thWaveNow, there appears to be nothing on the internet about Dr. Curtis Crane that is not completely laudatory and admiring of his surgical skills and acumen. YouTube videos sing his praises (see “Dr. Crane is AHmazing” and “Do I Regret Lower Surgery?” for two recent examples) . The Brownstein-Crane Facebook page contains 22 5-star reviews and only 2 negative reviews (neither of which mention the eight malpractice lawsuits). Susan’s Place, a major resource page for transgender people to connect and share resources, has a thread on Dr. Crane which contains only praise and, again, no mention of the extensive legal history cited above. Transgender Pulse, another major transgender resource and support forum, also has none of the above information about Dr. Crane. TSSurgery.com, a site providing information for transgender people about surgeons and others, that also contains reviews, has a large section on Dr. Crane, but again, no mention of his legal troubles.

Poignantly if not somewhat hypocritically, the “ftm” (female to male) Reddit references our earlier post about Dr. Crane as the source for information about his practice, and goes on to allege that his practice has been dropped from the Kaiser Permanente California health plan due to “the amount of lawsuits” against him: 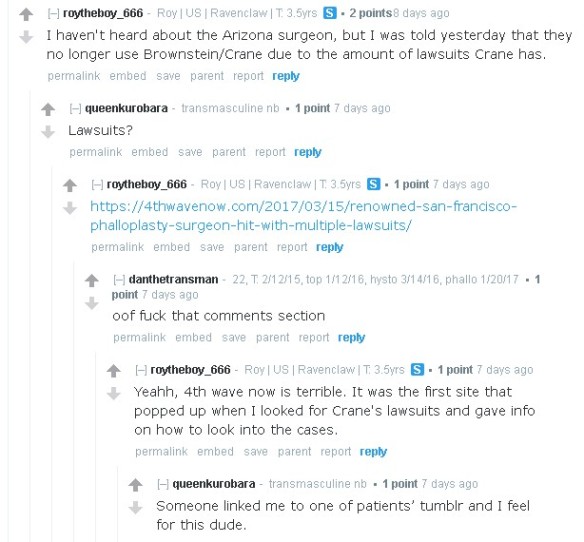 The types of injuries detailed above are truly sad. One can only imagine what life will be like for these patients in the years ahead, as they try to cope with malformed, misshapen, and certainly non-functional genitals. Moreover, many of these plaintiffs will have difficulty in maintaining proper excretory function, a complication that can have serious ramifications for health. The embarrassment, pain, expense, and disappointment must be profound. We ask, why are these actual injuries, suffered by actual transgender people, so much less important to the transgender community than such nebulous insults as “mis-gendering,” the inability to access a desired dressing room, or hurtful Tweets? The fact that Dr. Crane has been sued for medical malpractice in connection with transgender surgery no fewer than eight times in the last two years is a highly pertinent and relevant thing for transgender people to know. Why doesn’t the community want people to know it?