The trend of “socially transitioning” children as young as 2 or 3 years old to endorse the notion they are “born in the wrong body” is a very new phenomenon. But to read about it in the press, you’d think this was a settled area of clinical practice, with proven results and few doubts about its efficacy.

It is no such thing.

In a 2011 journal article,  Dutch clinician-researchers who first pioneered the use of puberty blockers cautioned that early social transitions can be difficult to reverse:

As for the clinical management in children before the age of 10, we suggest a cautious attitude towards the moment of transitioning. Given our findings that some girls, who were almost (but not even entirely) living as boys in their childhood years, experienced great trouble when they wanted to return to the female gender role, we believe that parents and caregivers should fully realize the unpredictability of their child’s psychosexual outcome. They may help the child to handle their gender variance in a supportive way, but without taking social steps long before puberty, which are hard to reverse.

Even the Endocrine Society, which actively promotes puberty blockers and cross-sex hormones for pubescent children, counseled against social transition in its practice guideline:

As recently as last year, a 17-clinic qualitative study reported on doubts some clinicans have about aspects of “affirmative” treatments for children:

As long as debate remains … and only limited long-term data are available, there will be no consensus on treatment. Therefore, more systematic interdisciplinary and (worldwide) multicenter research is required.

But among many clinicians and activists, social transition (which usually leads to puberty blocking and then to cross sex hormones) is now being actively promoted as completely harmless and “fully reversible.” Not only that: it is being shamelessly peddled as the only way to prevent suicide amongst children and teenagers.

What evidence do we have for these assertions? There is no historical record of desperately dysphoric “trans children” who demanded sex change lest they commit suicide.  The constant media and activist drumbeat that very young children must be socially transitioned ASAP; must be called by the correct pronouns; must have their “wrong bodies” fixed prior to the “wrong puberty”– or they will kill themselves–is the most irresponsible thing the mass media and medical profession could possibly do. It is a form of emotional blackmail which has terrorized countless parents into handing their kids over to gender clinics and activist-run “charities” for transition to the opposite sex. And the media, by running breathless stories implying that the only way to support gender-defiant and gender dysphoric children is to  “transition” them, may be contributing to suicide contagion, a phenomenon that has been well known for decades.

As far as evidence that social transition is “reversible,” which of these children is actually “reversing”? Certainly, the ones who have continued on to puberty blockers are not:

Imagine the pressures on any of the myriad trans-kid YouTube stars, or the children who are the subjects of the too-many-to-count fawning media portrayals we see in every major newspaper and magazine. Can a Jazz Jennings really change course?

None of the children who have been identified as “truly transgender” by clinicians like Norman Spack and Johanna Olson are going to get the chance to find out if they would have been just as happy not being socially transitioned. We won’t learn in any systematic way whether social transition and media validation could be creating persistence in children who might otherwise have grown up without medical and psychiatric tampering.  We can’t know, because researchers aren’t studying them; they don’t have control groups of children who claim to be the opposite sex but who are not socially transitioned and subsequently puberty blocked.

What is a truly transgender child? According to activists and some clinicians, the key trait (along with being generally “gender nonconforming” and preferring the clothes, activities, and appearance more typical of the opposite sex) is that these children are more “persistent, consistent, and insistent” in saying they are the opposite sex (vs simply wanting to be, or wishing they were).

But what is the meaning of “persistent, consistent, and insistent” with children who have only been on the planet a short time, as are the many toddlers, preschoolers, and grade schoolers now being labeled as “trans kids”?  Especially when a rather large percentage of these children also exhibit traits of autism—a disorder known to be characterized by rigid thinking, gender nonconformity, and obsessive/restricted patterns of behaviors?

Activists don’t seem troubled by any of this, nor by the decades of research showing most dysphoric children desist and grow up to be lesbian or gay adults.

The recent study most often cited by trans activists is one by Kristina Olson at the University of Washington, which essentially proved that children who preferred the activities and appearance of the opposite sex weren’t just pretending; they  really meant what they said! (Why would anyone question that?)

But even Dr. Olson, whose confirmation-bias-riddled study includes no control group of non-socially transitioned children, admits that no one can know the outcome for this new generation of experimental patients.

These kids are, by any measure, guinea pigs being subjected to social engineering and then (in most cases) experimental medical procedures, the results of which won’t be known for decades. Researchers like Kristina Olson are fully aware of this, but they think it’s worth the cost of some regrets, some detransitions. Because hey–it’s science.

A commenter on the above article aptly points out the elephant in the room: 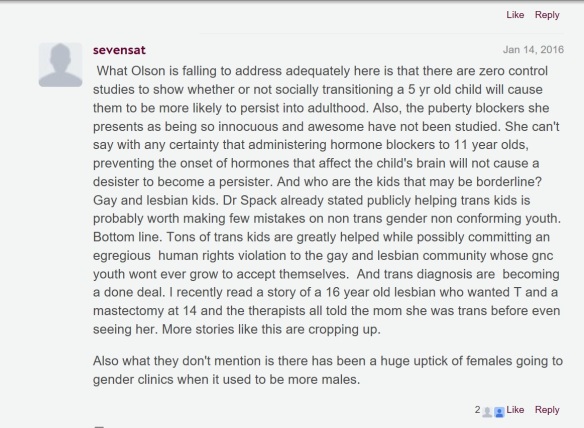 Fortunately, there is reliable data from other clinician-researchers which suggest a more cautious approach is still in order. We have a 2012 study by Devita Singh, which demonstrated that a very high proportion of kids—some 88%–happily desisted from a trans identification as adults.  It’s worth noting that several of these children were “persistent, insistent and consistent” in their formerly intense gender dysphoria.

Dr. Singh shared her views about early transition in a recent, unusually balanced article in The Walrus magazine:

Singh is frustrated that, despite the findings of her study and others like it, there’s now more pressure than ever for doctors and families to affirm a young child’s stated gender. She doesn’t recommend immediate affirmation and instead suggests an approach that involves neither affirming nor denying, but starting with an exploration of how very young children are feeling. Affirmation, she argues, should be a last resort.

These days there can be a high price to pay for treating gender affirmation as a last resort. Dr. Ken Zucker, a  renowned gender dysphoria expert, has approved puberty blockers and cross-sex hormones for many adolescents. Nevertheless, he recognizes that children often change their minds, and takes a careful approach in his clinical practice. For this heresy, he was hounded from his position at CAMH in Toronto by trans activists hellbent on preventing any kind of therapy for dysphoric kids besides “affirmation.”

But Dr. Zucker is still actively publishing,  having co-authored several scholarly journal articles in 2016 alone, and he continues to work with families and young people in his private practice.

In an age when too many believe that children, no matter how young, should be affirmed in their gender identities with no further investigation, clinicians like Zucker are very much needed. Desistance, despite trans activist protestations to the contrary, is a real thing. It’s just not as newsworthy as the latest trans kindergartener coming out story.

This places a heavy burden on parents who aren’t sure who their children are, or who don’t accept the notion that a 5-year-old, even an insistent and strong-willed one, has a set identity in the same way adults do. The current politics leave them behind, because their stories don’t fit neatly into the binary in which trans identities are either accepted or rejected, full stop. There’s no natural political grouping for parents of desisters, because desisting isn’t an identity-politics lodestone in the way persisting is. “We’re quieter,” said Amanda of parents of kids whose gender dysphoria desists. “There are a bunch of us scattered around, and we’re not acting collectively.” As Merry put it, “I feel like sometimes there’s no middle ground. You’re either trans or you’re not, and you can’t be this kid who is just kind of exploring.”