Note: All screenshots in this post are from publicly accessible websites.

Update 4/4/16: Lisa Toinen Mullin, whose comments on the WPATH Facebook page were featured in this post, has responded in the comments below. Please see the 4thWaveNow response here.

Update 4/1/16: How do the gender specialists and trans activists square their cavalier promotion of “trans-kid” sterilization with this: Many trans men have a fervent desire to be biological parents. By all indications, these people treasure their fertility. There are apparently so many of them that there’s a whole movement afoot to cleanse the language of birthing and reproduction of any trace of femaleness, in order not to offend trans men. For example, midwives are now admonished to say “pregnant person” instead of pregnant woman. And “vagina” and “breastfeeding” may be triggering, so must be replaced by “front hole” and “chest feeding,” respectively.

What say you, activists and pediatric transition promoters? Why would you want to deny trans kids the same opportunity to procreate that many trans men have?

I’m sure some of my regular readers must get tired of the constant reminder that puberty blockers followed by cross sex hormones results in permanent sterilization of preadolescent children. Many would probably call what I do harping. Why do I include this point in nearly every post I write?

Is it because I think every (or even most) trans-identified kids will grow up to want to be biological parents? Am I a proponent of replenishing the already overtaxed planet via endless childbearing? Am I biased in favor of reproduction because I am myself a parent?

Nope. It’s pretty damn simple. I just happen to hold the view, seen once-upon-a-time as a matter of common sense and ethics, that healthy minors should not be sterilized for any reason. That no adult has the right to sterilize a minor. That the capacity to bear offspring is a basic human right, and that a child’s reproductive capacity should be guarded by responsible adults against anyone who would even think about taking that right away before adulthood. That, by definition, no child or teenager can predict whether they’ll want to bear children later in life. (Having children is pretty much the last thing on the mind of tweens and teens—for good reason. How many 10 or 12 or 14 or even 20-year-olds have any concept of what that choice would mean?)

But not sterilizing kids is no longer a “duh” to journalists who write parrot trans activist talking points about “trans kids.” In fact, evidently some global uber-editor has decreed that this side effect of pediatric medical transition is so unimportant, is so worth it, that it doesn’t even merit a media mention. Very rarely do I see even a sentence acknowledging the guaranteed future sterility of trans kids who have followed the typical path from blockers to hormones. And I have never seen a mainstream journalist take up the issue as a moral conundrum, something to investigate in more depth.

So as long as the New York Times, the Washington Post, the Guardian, and the rest of the Fourth Estate (more like, the Fifth Column) continue to ignore that kids are being sterilized, this obscure blogger is going to keep drawing attention to that fact.

You’d think at least a scientific journal would deem child sterilization a worthy subject to discuss. But no. Even the venerable Nature, one of the most highly respected journals in science, which recently published a much-shared piece about new NIH-funded research on adolescent guinea pigs trans teens, says NOT ONE WORD about sterilized kids.

Very likely no one touches this topic because, well, it’s kind of a taboo. It’s a dirty little secret that trans activists would rather the general public not think too hard about. I mean, most sane people would raise a question or two about the wisdom of sterilizing kids.  (In my personal experience, there are two ways to get good liberals to do some critical thinking about trans issues: mention child sterilization or the fact that most gay/lesbian people don’t even fully realize and claim their orientation until their early 20s, long after medical transition commences.) After all, it’s even controversial (and, ahem, worth writing an article about) to talk about sterilizing severely disabled children. It’s even difficult for young adult women in their 20s or older to get their tubes tied.

The aforementioned Nature article is currently being discussed on the public WPATH Facebook page, and to my surprise, and to their credit, a couple of pro-trans clinicians actually put forward the fertility question as a troublesome aspect not covered in the article.

Who can argue with this simple declaration?  But as we’ve seen, activists and gender specialists are very eager to push the age for medical treatments lower and lower—be it “top surgery” for trans boys or genital surgery for trans girls. Why bother with the blockers at all, if (contrary to any evidence) little kids know they’re trans from the get-go? And sterilization? Nothing more than a “strawman” according to one trans activist: 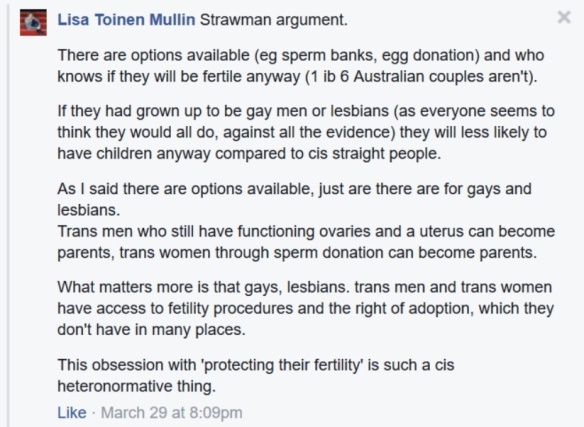 Oh, pshaw. Only “cis” heterosexuals concern themselves with silly things like “protecting fertility”–in children.  And anyway. LGBT adults tend to have fewer kids, so we’re safe to assume these trans kids probably won’t, either.

She says it: “I do not think teenagers can really understand what this loss may mean to them.” Not only that. She points out another little detail that isn’t discussed in the mainstream media: Children who go from blockers to cross sex hormones can never develop mature gametes–that is, it will be impossible for these people to ever produce their own biological children, because their body’s capacity to generate sperm and eggs will have been forever curtailed.

Bravo, clinicians. Even though you are enabling these kids to forfeit their future fertility (despite your admitting there may be problems in “30 or 40 years”), it’s good to see someone standing up for the reproductive rights not only of “trans” kids, but also gay and lesbian parents.

But the activists (whose only claim to authority is their own transgender status) are unswayed in their fervor to promote sterilization of other people’s children.

Although society recognizes that minors don’t have the cognitive wherewithal to vote, drink, sign contracts, or even use tanning beds safely, it’s simply “cisnormative logic” to be concerned that they might not fully understand what it means to be irreversibly sterilized at 14.

And what argument by a trans activist would be complete without reference to the transition or suicide!!! meme (despite no evidence that transition is the cure for self harm in teenagers, and despite the constant misuse of the 41% suicidality figure by activists and a prostrate media)?

Better sterile than dead. The adult trans activists have spoken. Other people’s minor children are “trans people” who will absolutely choose suicide over their future fertility.

Listen to your trans elders, kids, and ignore any doubts voiced by your parents. Statistics show that you’re less likely to want kids anyway when you grow up, and if you do? The Brave New World of medical technology will fix you up.

Not that you teens are the least bit interested in talking about having kids anyway. Childbearing? Who thinks about that? If anything, you’d be more interested in hearing about the latest advances in neovaginas or phalloplasty technology. And while you’re waiting for your genital surgery,  discreet panties with a “thick cotton crotch insert to mask the genitals” and teeny bopper packers can tide you over.

76 thoughts on “Better sterile than dead: How trans activists justify destroying the fertility of minor children”