This post is written by overwhelmed, a 4thWaveNow community member and mother who recently wrote about her own daughter’s desistance from trans identification. Her personal experience inspired her to submit this piece about the current effort by some activists and gender specialists to discredit decades of peer-reviewed evidence that most children with gender dysphoria do indeed change their minds.

Stay tuned for an upcoming post by 4thWaveNow that will take a closer look at the anti-desistance meme being propagated by proponents of  pediatric “transition.”

There should be regulations in place to protect our children from harmful medical interventions. I think most people would consider this statement a matter of plain common sense. But unfortunately, common sense seems to fly out the window when “trans kids” are involved. More and more gender dysphoric children are being treated with puberty blockers, cross-sex hormones and even surgeries at young ages.

Trans activism has been busily exerting political influence on the medical field.  Being closely tied to LGB has given the T legitimacy (even if the aims of T conflict with those of the LGB). Trans activists have helped convince the public that gender identity is comparable to sexual orientation. They insist that helping children become comfortable with their birth sex is as abominable as conversion therapy is to homosexuals; that it is bigoted to want a child to avoid being transgender, just as it is bigoted to not accept a person as gay. But, the thing is, unlike the T, the LGB doesn’t require all of these medical treatments. And, unlike the T, the LGB just want people to accept their sexual orientation. Besides political gain, there really is no good reason to conflate gender identity and sexual orientation.

Recently, trans activism forced the closure of the CAMH Gender Identity Clinic in Toronto. In response to this closure, sexology researcher Dr. James Cantor  posted a compilation of childhood gender dysphoria research going back many decades on his site Sexology Today:

Following the closure of the CAMH Gender Identity Clinic for children, I have been receiving requests for what the science says.  Do kids grow out of wanting to change sex, or does it continue when they are adults?

In total, there have been three large scale follow-up studies and a handful of smaller ones. I have listed all of them below, together with their results. (In the table, “cis-” means non-transsexual.) Despite the differences in country, culture, decade, and follow-up length and method, all the studies have come to a remarkably similar conclusion: Only very few trans- kids still want to transition by the time they are adults. Instead, they generally turn out to be regular gay or lesbian folks. The exact number varies by study, but roughly 60–90% of trans- kids turn out no longer to be trans by adulthood.

Cantor shared his post on the the World Professional Association for Transgender Health (WPATH) Facebook page. Although WPATH supposedly promotes evidence-based care and research, the vast majority of WPATH Facebook commenters appear to have strongly held opinions that contradict WPATH’s professed mission. Many state that once someone identifies as transgender, they will be transgender for life (regardless of the age of realization). Some commenters say it is a right for anyone (gender dysphoric or not) who wants to have these medical interventions.

When confronted with Dr. Cantor’s research compilation, there were many attempts to discredit the information. Some commented that the studies were old, flawed, invalid, and called them “junk science.” But others were more confrontational:

Another commenter, Colt Keo-Meier, trans activist academic and recent (2013) psychology graduate from the University of Houston, is currently the co-chair of the Committee for Transgender People and Gender Diversity, Division 44 of the American Psychological Association (APA). This committee issued guidelines a few months ago that effectively put a damper on the clinical judgment psychologists and social workers can use when treating their gender nonconforming and trans-identified clients (more on these APA guidelines shortly).  Keo-Meier apparently believes that a child’s persistence in a transgender identity is to be desired.

The last commenter on Cantor’s thread I will mention is Jenn Burleton (of “In a Bind” fame), who here discounts the research compiled by Dr. Cantor (referred to by Burleton as “Mr. Candor”) as flawed, while bragging about the 0% desistance rate of the over 200 kids seen at Burleton’s TransActive Gender Center. 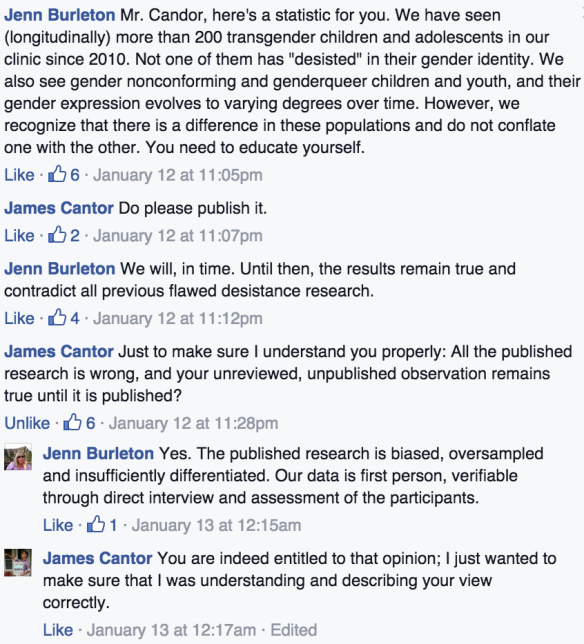 Jenn Burleton seems to celebrate the 0% desistance rate, but the fact that it contradicts decades of prior desistance research should raise alarms. What approach do they use at the TransActive Gender Center to obtain these “impressive” results?

So gender-confused children seen at TransActive are affirmed as the opposite sex, socially transitioned, and treated to the “empowerment” of pubertal suppression, cross-sex hormones and surgeries. Is it any wonder these kids don’t desist? They are literally being conditioned to keep believing something is wrong with their bodies. Additionally, these socially transitioned children, even if they did start to have doubts, will likely feel tremendous pressure not to go back to their birth sex. Adolescence is already challenging enough without these complications. Just imagine how difficult it would be for a child in public school to start out as Jennifer, but later change to John.

As it turns out, the American Psychological Association (APA) recommends the affirming and accepting approach that Jenn Burleton has put into action. (As an aside, it should be noted that five of the ten members of the Task Force responsible for the guidelines were transgender themselves.) The APA Guidelines mention two different approaches for working with gender dysphoric children, but only one of them is deemed ethical. As you read, please keep in mind that “TGNC” has been defined as Transgender and Gender Non-Conforming people, in effect, conflating these two groups of children:

One approach encourages an affirmation and acceptance of children’s expressed gender identity. This may include assisting children to socially transition and to begin medical transition when their bodies have physically developed, or allowing a child’s gender identity to unfold without expectation of a specific outcome (A. L. de Vries & Cohen-Kettenis, 2012; Edwards-Leeper & Spack, 2012; Ehrensaft, 2012; Hidalgo et al., 2013; Tishelman et al., 2015). Clinicians using this approach believe that an open exploration and affirmation will assist children to develop coping strategies and emotional tools to integrate a positive TGNC identity should gender questioning persist (Edwards-Leeper & Spack, 2012).

Notice how there isn’t any warning about possible negative consequences of the affirming and accepting approach? Just keep validating these kids and telling them it is possible to become the opposite sex. There seems to be no concern from the APA that all of this affirming will condition the child into believing they are transgender (when they may have desisted).

The APA guidelines do mention a second approach, though:

In the second approach, children are encouraged to embrace their given bodies and to align with their assigned gender roles. This includes endorsing and supporting behaviors and attitudes that align with the child’s sex assigned at birth prior to the onset of puberty (Zucker, 2008a; Zucker, Wood, Singh, & Bradley, 2012). Clinicians using this approach believe that undergoing multiple medical interventions and living as a TGNC person in a world that stigmatizes gender nonconformity is a less desirable outcome than one in which children may be assisted to happily align with their sex assigned at birth (Zucker et al., 2012). Consensus does not exist regarding whether this approach may provide benefit (Zucker, 2008a; Zucker et al., 2012) or may cause harm or lead to psychosocial adversities (Hill et al., 2010; Pyne, 2014; Travers et al., 2012; Wallace & Russell, 2013). When addressing psychological interventions for children and adolescents, the World Professional Association for Transgender Health Standards of Care identify interventions “aimed at trying to change gender identity and expression to become more congruent with sex assigned at birth” as unethical (Coleman et al., 2012, p. 175). It is hoped that future research will offer improved guidance in this area of practice (Adelson & AACAP CQI, 2012; Malpas, 2011).

The APA felt the need to add on some warnings to the “embrace their given bodies” approach–just as WPATH members scolded Cantor that encouraging a child to align with their natal body is UNETHICAL. Seemingly defying common sense, we have literally come to the point that it is considered immoral (and in some areas illegal) to help a child feel comfortable with their body.

Yes, I said illegal. In more and more places, legislators are making the “embrace their given bodies” approach unlawful. Since 2012, the United States has banned gender identity “conversion therapy” in California, New Jersey, Illinois, Oregon, the District of Columbia and the city of Cincinnati, Ohio. And, in Canada, the practice has been banned in Ontario.

As parents who haven’t bought into the truth of our children’s sudden trans self-diagnosis, we have found ourselves in the position of going against the advice of WPATH and the APA. We want our children to realign with their bodies, to once again be whole, to be healthy. Desistance is our goal. We are not being transphobic, we sincerely care about the health of our children. We don’t want to “affirm” them as the opposite sex and validate that there is something so wrong with them that it leads to cross-sex hormones, surgeries and becoming lifelong medical patients. Transitioning should be a last-ditch effort, something to be used only when all other options have been thoroughly exhausted.

These guidelines and legislation, however, have made it difficult, and in some areas impossible, for parents to find mental health professionals willing to help their children (many of them with pre-existing mental health issues) feel comfortable in their bodies. Trans activists are using their influence to change medical guidelines and legislation to align with their strongly held beliefs, despite the scientific research that contradicts them. Instead of having desistance as a goal, they are working hard to make it a myth.

64 thoughts on “Guest post: Why do WPATH & the APA scorn desistance?”