Scanning through my Twitter feed this morning, I nearly scrolled past this little news item tweeted by the Guardian:

Yesterday, I posted about a very recent research survey conducted by members of the Dutch team of clinicians who pioneered pediatric medical transition. They found that, worldwide, there is a growing sense of unease amongst clinicians working in child gender clinics. It is widely acknowledged that there is no long-term research to support the current medical paradigm for “treating” children with gender dysphoria–to the point that some providers are even forming “moral deliberation” groups to “rethink” aspects of the pediatric “treatment” protocol.

Does the Guardian article hint at any such doubts? To be fair, the director of London’s Tavistock clinic, Polly Carmichael, does hint:

“The increase is challenging,” Carmichael said. “We are keen to provide space for young people to fully explore their options and find their own way forward. It is a very complicated issue.”

If Guardian reporters would bother to read the 17-clinic survey study, they might be able to expand a bit more on some of these “complicated issues.” Oh wait, they do–in one paragraph, written in the passive voice, accompanied by a glamorous photo of Laverne Cox:

Increased media interest, the proliferation of social media where children and young people can discuss gender identity issues, and the prevalence of trans figures in popular culture such as Caitlyn Jenner and Laverne Cox, is thought to be part of the reason why there has been such a significant increase in these referrals.

“Thought to be”–it is thought by whom?  Couldn’t you find anyone to go on the record to say this publicly? And just how ironic is it that this reporter touches on “increased media interest” without even a phrase devoted to her OWN role, in this very article, in promoting the media circus.

But never mind, because the rest of the article makes clear that the real issue is how important it is to serve all these kids and parents who are demanding transition services.

A spokeswoman for the Tavistock said: “Gender expression is diversifying”, adding that it was important for young people to explore and develop their own path.

Let’s see: Should some of those kids with their “diversifying” identities perhaps just be advised to be comfortable in their own bodies?  Is it the duty of the NHS to be “candy sellers” (to quote the wise ethicist in the Journal of Adolescent Health survey) vs. raising a few questions with primary-school children and their doting parents? If question-raising or encouraging other, less extreme options is part of what “support from specialist services” means, it is certainly not stated in this article.

Instead, we get to hear from none other than Jay Stewart, of “Gendered Intelligence,” that NGO which has been teaching preschoolers about gender for the last 7 years.

Jay Stewart, director of Gendered Intelligence, an NGO that promotes greater understanding of gender diversity, said there are now more than 50 gender options on Facebook rather than the traditional two.

Tail wagging the dog much? Kid signs up for an account on Facebook. Kid has 50 “identity” options to choose from. Hm, kid ponders. Guess this gender thing is really something I need to worry about.  Guess I need to decide whether my body is some alien appendage attached to my all-knowing, gender-generating mind. Because I can’t possibly actually BE my healthy, evolution-crafted body, can I? I am only my ideas, my notions–one of the “identities” Facebook helpfully cooked up with the help of trans-identified employees.

“This is the tip of the iceberg of what gender identity is going to look like in the future,” [Stewart] said. “Young people have a very sophisticated understanding of gender yet the world is lagging behind. There is poor understanding of these issues and a lot of hostility and discrimination. Everyone’s gender identity and journey is unique and the numbers of children and young people wishing to transition are going to keep going up and up.”

If it wasn’t clear from other statements Stewart has made publicly, this paragraph crystallizes the matter. “Gendered Intelligence” is not in the business of helping children (with their “sophisticated understanding”) feel positively about who they are. Stewart isn’t teaching 4-year-olds to break gender stereotypes. Right here in black and white, we see that children “wishing to transition” is what those drug-company-taxpayer-funded “lessons” are all about. Because the word “transition” means only one thing: rejecting the sex you are to become one you aren’t.  And as we know from the story reported a couple of days ago, granting childish wishes is what Stewart and his minions are all about:

It’s so important to be teaching children in schools that they can be anything that they want regardless of the gender that they have been given at birth.

Seems Jay Stewart might as well be appointed as a government minister in the UK. Yesterday’s Guardian also featured Stewart as the key advocate for what sounds like soon-to-be-implemented governmental oversight of social media for UK residents who use Twitter, Facebook, or other online networking sites:

Jay Stewart, the director of Gendered Intelligence, a transgender youth group, agreed that more needed to be done about transphobic abuse online…

…“There needs to be more regulation. If people behaved like that in a school or at work it would be dealt with.

“People also think that being trans has something to do with child abuse or they obsess over gender reassignment surgery. All of this comes down to an educational issue and the government can do more here,” Stewart said.

Seems like the government is doing quite enough, paying for Gendered Intelligence to propagandize children in the UK schools, and providing free-at-point-of-service medical transition. But hey, a new Ministry of Thought Police would give taxpayers more bang for their buck, with Stewart at the helm.

Returning to today’s Guardian piece, what about the surge in girls “wishing” to transition, a trend that is being noticed around the world?

According to the Tavistock figures, more girls want to become boys (893) than boys want to become girls (579). Carmichael said the larger number of girls was likely to have a complex explanation. “It might be to do with increased confidence in natal females coming forward but there are lots of unknowns. But we’ve seen a large rise in natal females coming forward, which deserves fuller exploration,” he said.

At least this spokesman thinks the issue “deserves fuller exploration.” But the Guardian reporters aren’t going to do that exploration, now are they? ARE they?

Because, right. It’s just that girls who hate their bodies are feeling more “confident.” Confident of what? Certainly not that it’s perfectly ok to be a “gender nonconforming” female without spending the rest of your life injecting testosterone, undergoing surgery after surgery, and, oh, maybe regretting the kids you never got to have because your parents and people like Jay Stewart–and the “charity” Mermaids–thought it was a brilliant idea to sterilize you instead of allowing you to go through natural puberty.

The charity Mermaids, which provides support to children and families on the issue of gender transition, says children who want to transition can be given gender hormone blockers to prevent the onset of puberty followed by cross-sex hormones. The former are reversible but the latter are less reversible. Currently cross-sex hormones are available from the age of 16 on the NHS.

Signal boost, parents and teens! Just letting you know to come-and-get your free-at-the-point-of-service testosterone when you turn 16! But cross-sex hormones are “less” reversible. That’s a pretty wishy-washy way of saying that your beard, deep voice, and a host of other things that haven’t even been researched are going to be permanent changes. Oh, and then there’s that pesky little problem I keep harping about: that when you follow blockers by cross-sex hormones (as casually mentioned in the paragraph above) you won’t be able to have any kids of your own. But you couldn’t have mentioned that, could you, Diane Taylor, the author of this piece, with your “particular interest” in “human rights”? How about the human right of not being proactively sterilized and permanently altered when you’re too damn young to understand what you’re doing?

Susie Green, the chair of Mermaids, said:“Our children are being failed on a daily basis … There is a crisis. NHS primary care services often don’t understand what is going on with these children and can be dismissive and say, ‘This is just a phase they’re going through.’ 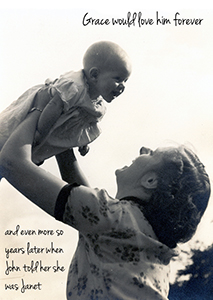 Except that the people who know the most about these issues, including the Dutch clinicians who started this whole pediatric transition thing, say, over and over again, that most prepubescent children ARE usually just “going through a phase.”

And in case it isn’t painfully clear, you bet I am writing this post in anger this morning. When even some of the people who administer these “treatments,” who are profiting from them, are expressing doubts, but the lazy mainstream (and even the supposedly “feminist” media) continues to behave as de facto propaganda organs for adult trans activists, it’s hard not to become infuriated.

I keep thinking I’m past outrage. But the blood pounding in my ears right now tells me I’m nowhere near Peak Trans.